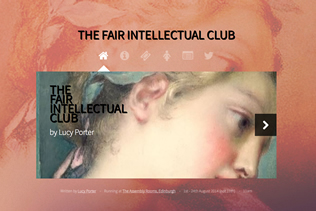 As well as her standup show, Lucy has written a play.
“The Fair Intellectual Club” runs at the Assembly Rooms from the 31st July until the 24th August 2014.

A tale of teenage love, friendship and betrayal set at the dawn of the Scottish Enlightenment.
Based on the true story of three Edinburgh girls who formed The Fair Intellectual Club in 1717.
They recruited other young ladies aged 15-19 with a view to discovering ‘what we might attain unto if we were as industrious to cultivate our minds as we are to adorn our bodies’. Members studied literature, science and philosophy.
They were sworn to absolute secrecy, but betrayed by an enemy within who exposed her sisters to scandal.

You can read more at The Fair Intellectual Club website.