Love In At Lakeside

Ahead of her gig at Lakeside, Michael Simon spoke to Lucy Porter.

Lucy Porter doesn’t so much do stand up as have a nice chat using a microphone, and with sell out tours and glowing reviews from the Edinburgh fringe, she doesn’t do it half badly. She’s even made it to the West End, performing alongside Christian Slater in One Flew Over the Cuckoo’s Nest. We spoke to her about heckling, cock-crazed audiences and whether to perform in front of your mum. 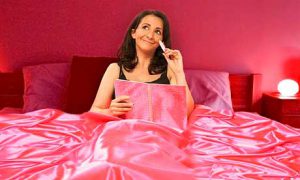 People say you have a conversational tone, is there a big difference between your routine and having a chat with someone?
No, it’s pretty much what you see is what you get. I wish I was brainy enough to have come up with a stage persona which is different to my real life ways. I talk a bit faster.

Do you change your routine for different audiences?
Yeah, it’s different every night, it’s so affected by what the audience is like. That’s what makes live stand-up such a beautiful thing. The people in the room really dictate what the show’s going to be like, and I just like having a bit of variety. It keeps it interesting for me as much as for anybody else.

How was supporting Puppetry of the Penis?
Fun, but very peculiar. The audiences were ninety nine percent female and initially they weren’t happy about seeing another woman on stage. What they were really after, if I can say, was cock. They’d boo me on stage; every night I’d walk out to this chorus of ‘Get off!’ That toughened me up, every night I had to turn that around from hatred to love. It was very handy to do that.

Do you think people still have stereotypical attitudes to female comedians?
It’s getting better all the time. I think it’s not a natural job for a woman, but it’s not a natural job for anyone really. I think women don’t like to be laughed at as much as men do, and I think people are a bit nervous laughing at a woman, because we can be a bit psycho. I think blokes are a bit scared to laugh at women in case they turn around and say ‘Are you laughing at my arse? Are you saying I’m fat or something?’ I’ve been doing the circuit for eleven years, and in that time so many brilliant women have come through. When I first started I got the idea that sometimes audiences would sigh in disappointment if a woman walked onto the stage, whereas now I don’t think they do.

Were those some of your most hostile crowds?
When I first started doing comedy in Manchester I did some of the working men’s clubs, which when you’re a twenty two year old girl and you’re not a stripper is no place to be. They couldn’t work out at all what I was doing, and it was totally the wrong kind of comedy for the audience. They just hated me so much it was unbelievable.

Have you ever heckled?
I did once at a gig. I was a bit drunk, to be honest and I was talking very loudly. It was this American act who hadn’t been over long, and he was talking about air plane food and I ended up correcting him, loudly, when he got a few things wrong. That was quite embarrassing, and I realized how scary it is being on the other side. I try not to be intimidating because I’ve had it happen to me, and I didn’t like it.

I read that you have an audience member be your bitch as part of your act…
I only pick on people who seem willing to join in. I did once ride someone around the stage like a pony, but he quite enjoyed it I think.

Would you change your material if you knew your mum was in the audience?
Well yes, to be honest, which is a terrible admission. My mum’s never seen me do stand-up and she was going to come to my show in Edinburgh, but at the last minute we both decided it might be a bit embarrassing, because there are some things you don’t want to say in front of your own mother.

Do you get recognised from having been on the telly?
No, I always think I’m getting recognised but it turns out that I look like a lot of Irish girls. People always say ‘I think I know you,’ and I think, ‘finally, recognition off the telly’, and they go ‘are you Bernadette Devlin, did you go to school with my sister?’ But I wouldn’t really want to be recognised so it’s quite good. I don’t do that much telly, so it would be a very nerdy comedy fan who recognised me.

Comedians seem to polarize themselves by class, so which side of the fence do you think you sit on?
It’s fascinating what’s happened to class in this country in the last ten years or so, and comics are now in the minority who still identify themselves as working class. It’s hilarious when you get posh comics who affect a working class accent. I’m lower middle I would say. I went to a nice girl’s convent school, not paid for, but nice. Though for a time we did get free school dinners, which was the sign that you were a bit poor. So make it up for yourself.

How did you choose to do One Flew Over the Cuckoo’s Nest?
That wasn’t really much of a choice; someone said ‘do you want to do it?’ and I tend to say yes to everything. I just don’t see the point in saying no, really. You should take everything that’s offered to you and see if you like it. I only had three lines, and it was fab. It was the most glamorous thing I’ve ever done in my entire life, it was everything that you imagine being a West End luvvie is like, out every night drinking champagne cocktails with Burt Reynolds. Things you think are going to be amazing are normally quite underwhelming but that absolutely lived up to it.

Could you tell us a joke?
A woman’s looking in the mirror and she says to her husband, ‘I’m looking old, fat and ugly, give me a compliment,’ and he says to her ‘Well your eyesight is spot on.’ You can’t get better than that, can you?