he comedian Lucy Porter tells a cautionary tale, suggesting why you should never pack while under the influence. 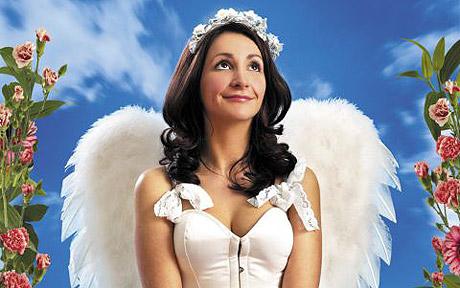 Which was your best holiday?

I adore Las Vegas, even though I know it’s wrong, environmentally disastrous and tacky. But it’s one of my favourite places in the world – I love the flashy lights and the showiness of it all. Four years ago, I went there for a comedy festival and did all the touristy musts. I visited the Liberace museum, saw Siegfried & Roy and went to the Grand Canyon. I also played Caesar’s Palace, which was the culmination of all my Elvis dreams. The flip side is always the risk that I’m entertaining people who’ve just lost their life savings on a roulette wheel.

And the best hotel you’ve stayed in?

It was a five-star hotel in Naples, Florida, when I was absolutely knackered and my boyfriend promised: “We’re going to go somewhere and do absolutely nothing.” Naples is one of those sleepy resorts, so it was us and a load of pensioners. It was a really beautiful, luxurious hotel with a gorgeous spa and the best steak house ever. There was a dog track down the road so it was an ideal mixture of spending pampered days in a really classy hotel, then at night, we’d go out to the dog track and be a bit “redneck”.

What do you need for your perfect holiday?

Hot weather, because I’m totally addicted to sunshine. I recently went to Dubai and when everyone stayed inside with the air conditioning maxed up, I was outside wandering around. We are considering splashing out on a holiday in the Maldives, but I would probably go insane after a day if I couldn’t get to a pinball machine or some decent coffee.

What do you always take with you?

Candles. When I first started doing comedy, an Australian comedian called Julia Morris gave me a tip: “Wherever you stay in the world, get some little scented candles that you like. Then you can make anywhere smell like home so that you don’t feel lonely.”

Always carry a spare pair of knickers in your hand luggage. If an airline loses your luggage, all you really need is spare knickers and a bikini. Unless you’re in Alaska and then you’re screwed.

Where do you want to go next?

Costa Rica, because I recently read a survey that said it was one of the happiest places on earth. I’ve always wanted to go to South America because I’ve been to North America and I’d like to complete that continent so then I can move on to somewhere else.

Which was your worst holiday?

When I was a child, my parents frequently took us caravanning and, through no fault of their own, my mum and dad have left me and my sisters with a lifelong aversion to outdoors holidays. It must have been the mixture of rain, chemical toilet and plastic seating that scarred me.

And your worst travel experience?

I could never go back to Athens. I went over to do some shows for the British Council, which was great, but I stayed in a hotel room where the plumbing was ancient. After a bath, I pulled the plug out and the toilet overflowed into my bedroom. Downstairs I complained to the receptionist that raw sewage had flooded my bedroom. She asked: “Do you want someone to come and have a look?” to which I replied with sarcasm, “Oh no, don’t bother.” I couldn’t believe it when she said, “Fine”, before turning back to her work, so I immediately had to apologise that I was being facetious. On the same trip, I booked a taxi to take me to the Acropolis when the driver effectively kidnapped me and demanded all my money with menace. It was terrifying.

I once went to Holland for a friend’s birthday but I was drunk when I packed. When I opened my case, I pulled out a mug from my kitchen, 20 pairs of knickers and five pairs of jeans with absolutely no tops in there. I had to buy loads of gear otherwise I’d have had to wear jeans and a bra for the entire week. It was an expensive way to learn a lesson about not packing when drunk.

Which is the worst hotel you’ve stayed in?

Six years ago, I was doing a gig in Swansea and I checked into a B & B which only cost a tenner, so I really deserved everything I got. It was run by this weird looking, mono-browed family who stared and leered when I checked in. I went off to do my show but when I returned they were having a crazy sex party with just two women and a load of men. I had nowhere else to go so I rushed upstairs, but when I got into bed, they knocked on my door and said: “Hey, come down and join our party!” I was terrified and sat up all night with a chair wedged against the door before leaving at 6am. I haven’t recovered from that one yet.

What do you avoid on holiday?

I went to Albufeira recently and the English bars tend to be worth avoiding. I love our drinking culture at home but when you see it exposed in Europe you can see why other nations think we’re drunks. Luckily the Russians are giving us a run for our money now. So thank goodness we’re not the yobs of Europe any more.

What do you hate about holidays?

Nothing, I could be on holiday all the time as I never get bored. I should have been born into aristocracy really so that I wouldn’t need to work.